Sheriff Jaime FitzSimons leads the Summit County Sheriff’s Office, where he directs the work of 73 dedicated law enforcement and civil employees in their duties to serve the residents and visitors of Summit County, Colorado. He first joined the organization in 2006 and has served as Patrol Deputy, Detective and Operations Division Commander. 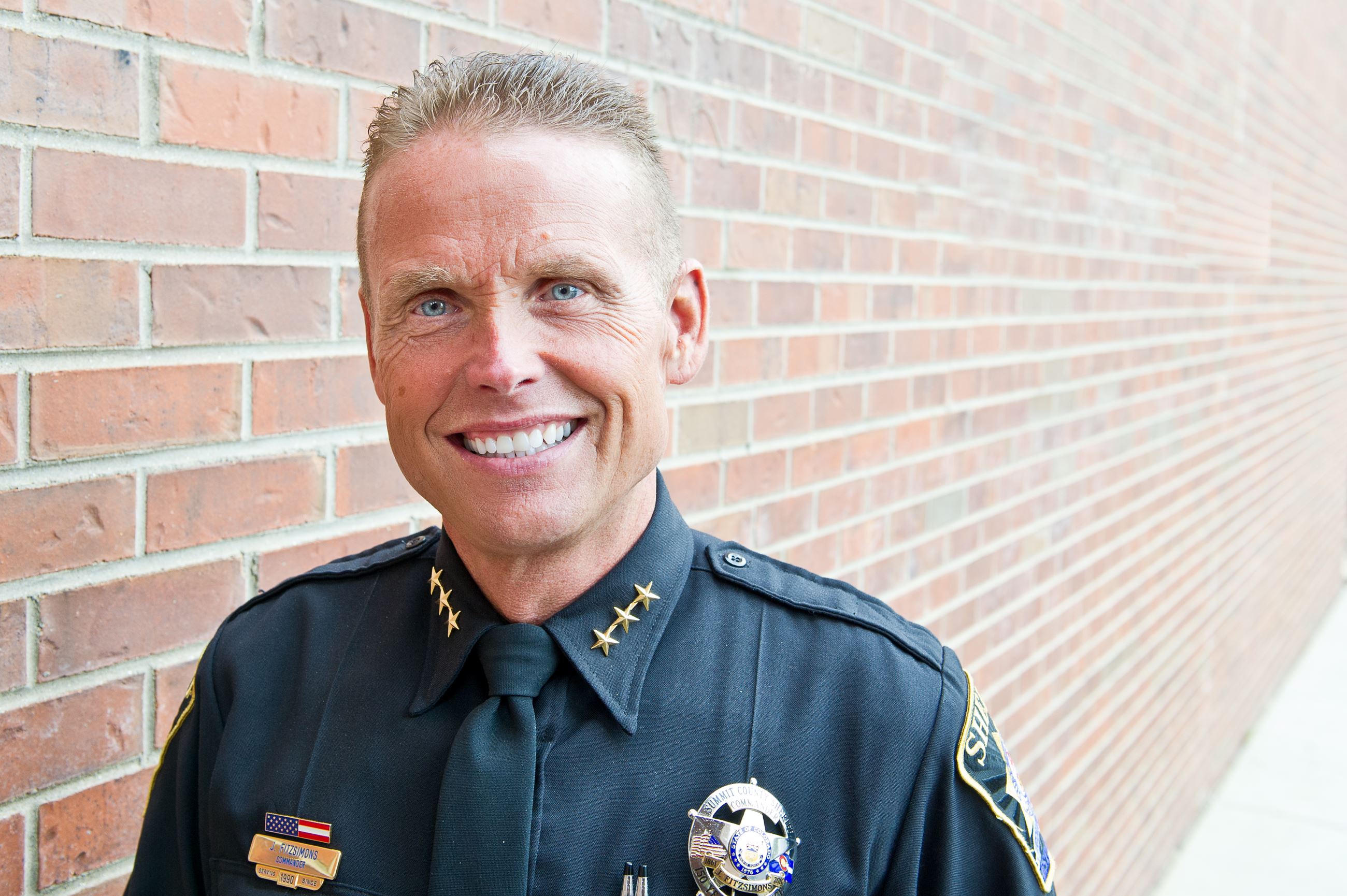 FitzSimons was born and raised in Los Angeles, California, where he was an avid surfer, skateboarder and competitive marathon runner. He joined the Los Angeles Police Department in 1990. From 1990 to 2005, FitzSimons served in various patrol assignments, the Special Problems Unit, the Gang Unit and undercover narcotics work.

During his tenure with LAPD, FitzSimons was promoted to the ranks of Patrol Sergeant and Detective. In those positions, he investigated complex murders, robberies, sex crimes, crimes against persons, gang crimes, burglaries, thefts, frauds, embezzlements and narcotics violations; he also conducted covert surveillances and personnel complaint investigations. FitzSimons participated in responses to numerous historic incidents and events, including the Los Angeles Riots (1992), Malibu Wildfire (1993), Northridge Earthquake (1994), O.J. Simpson Murder Case (1994), Malibu Floods (1995), North Hollywood Shootout (1997) and Southern California Wildfires (2003).
FitzSimons moved to Summit County in 2005, briefly serving in the Summit County 911 Center. In 2006, Sheriff John Minor recruited him to join the Summit County Sheriff’s Office as a Patrol Deputy. FitzSimons was promoted to Detective in 2006, drawing on his expertise gained in Los Angeles to conduct complex criminal investigations. In 2008, FitzSimons was promoted to the rank of Operations Division Commander, overseeing Patrol, the Criminal Investigations Division and Special Operations. In addition to oversight of functional operations, he also ensured compliance with policies, procedures, regulations and standards. He also filled the roles of both Sheriff and Undersheriff in their absence. In 2013, FitzSimons took on the added responsibility of leading the Summit County Combined Special Weapons and Tactics Team (SWAT).

FitzSimons was elected Summit County Sheriff on November 8, 2016. FitzSimons has spent his career building and maintaining partnerships and collaborative relationships with numerous local agencies and organizations, as well as state and federal agencies.

In 1990, FitzSimons married his wife Lena; the couple have two grown children who also call Summit County home. Sheriff FitzSimons has traded his surfboard for skis, but still enjoys skateboarding. He is an avid outdoorsman who also enjoys hiking, mountain biking, trail running, snowshoeing and snowmobiling.

FitzSimons has served as a technical consultant in the film industry on numerous projects, including "Street Kings," "End of Watch," "Prisoners," "Sabotage," "Nightcrawler," "Fury," "Southpaw," "Stronger" and "Bright."

Undersheriff Joel Cochran oversees the four Sheriff's Office Division Commanders and their respective areas of operation. Prior to this position, Cochran served as the Director of Emergency Management for Summit County government. He has lived and worked in Summit County for more than 30 years.

Undersheriff Cochran previously worked in the Special Operations unit as a Sergeant, and while with the Breckenridge Police Department, as a Detective/Sergeant. Cochran holds certifications under the State of Colorado as a Peace Officer and under credentialing system as a Type-3 Certified Planning Section Chief. He is a graduate of University of Colorado at Denver and holds a master's degree in criminal justice. 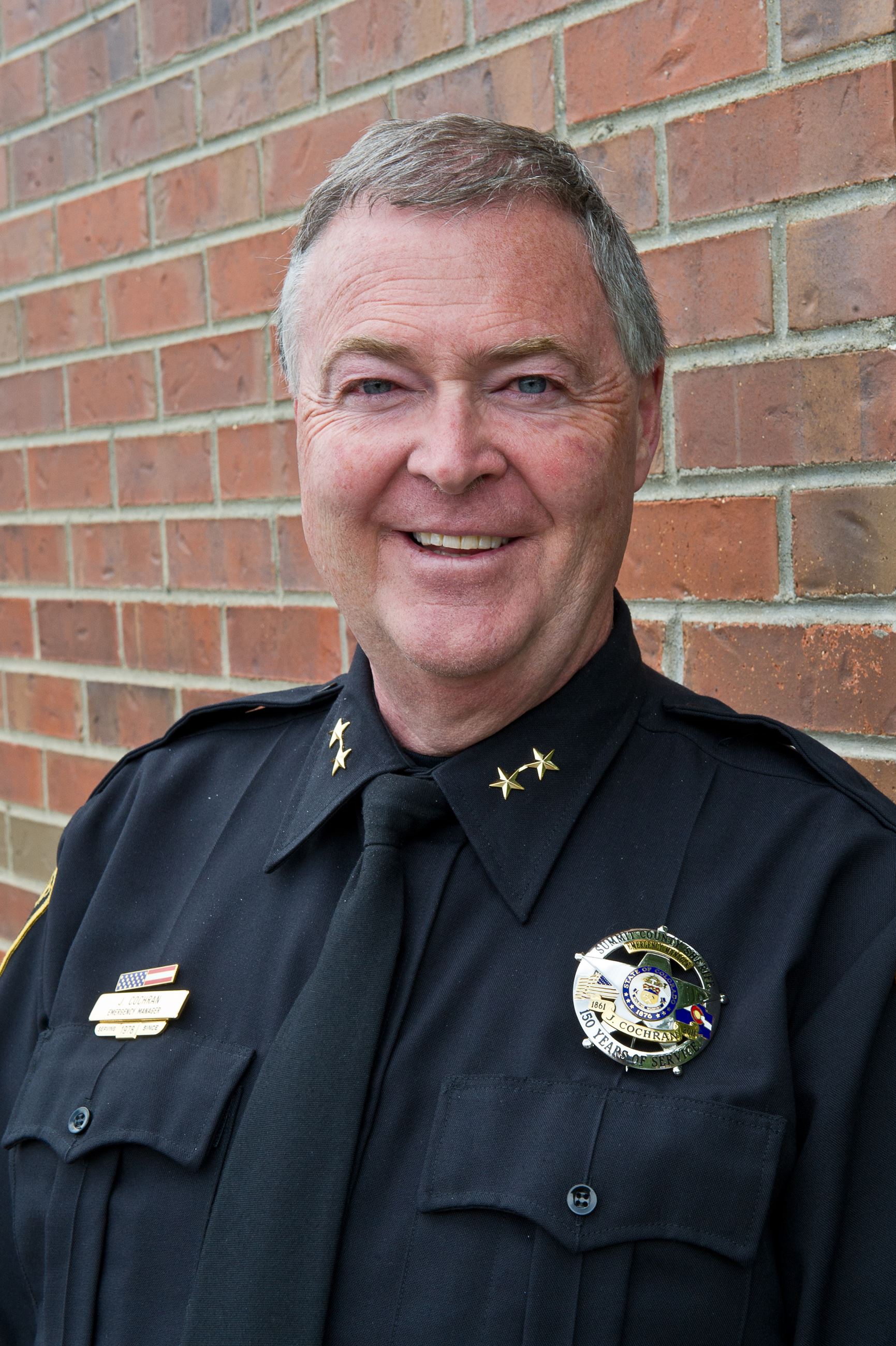 
A twenty-year resident of Summit County, Mike Schilling was born in Paducah, Kentucky and raised in Naperville, Illinois. He attended The University of Iowa completing a Bachelor of Business Administration Degree in Finance in 1999. Mike’s experience in organizational leadership began shortly after graduation where he held the role of Assistant Vice-President at Firstbank of Breckenridge from 1999 to 2002. From 2002 to 2016, Mike led Breckenridge based Valdaro Development, LLC as its President where his responsibilities included, but were not limited to all aspects of project management, budgeting, finance, legal, and management leadership.

After nearly eighteen years working in the business world, Mike felt a call to service and made a 180 degree turn with his life to pursue a career in law enforcement. Upon obtaining his Colorado Peace Officer Standards and Training (POST) Certification through Red Rocks Community College Police Academy in 2016, he immediately began working as a Patrol Deputy for the Summit County Sheriff’s Office. Mike is a proud member of the Sheriff’s Office Honor Guard and has a passion for honoring the service and sacrifices of others. 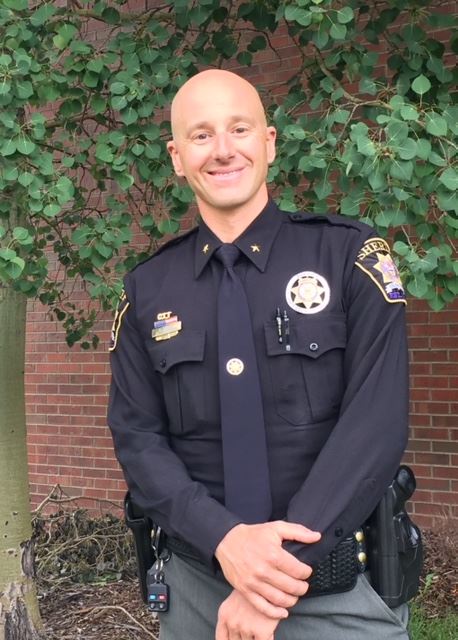 Mike has a long history of making a difference in the Summit County community. He has worked collaboratively with community partners in his role as both Board Member and President of the Summit Foundation from 2012 to 2017. He was the Co-Chair of the Local Organizing Committee for the USA Pro Cycling Challenge in 2011 and 2012. Mike was also a member of the Summit County Sheriff’s Office Citizen Advisory Committee from 2009 to 2016 and served as a Summit County Upper Blue Planning Commissioner from 2012 to 2014.
Mike and his wife, Amy Freeman, live in unincorporated Summit County near Breckenridge with Greta, a standard poodle. Mike is a regular competitor in Summit Mountain Challenge bike races and is a past overall series champion. In the winter he spends his free time on skis to keep fit and always looks forward to endurance events such as Frisco Gold Rush Nordic ski race and the 5 Peaks Ski Mountaineering Race. 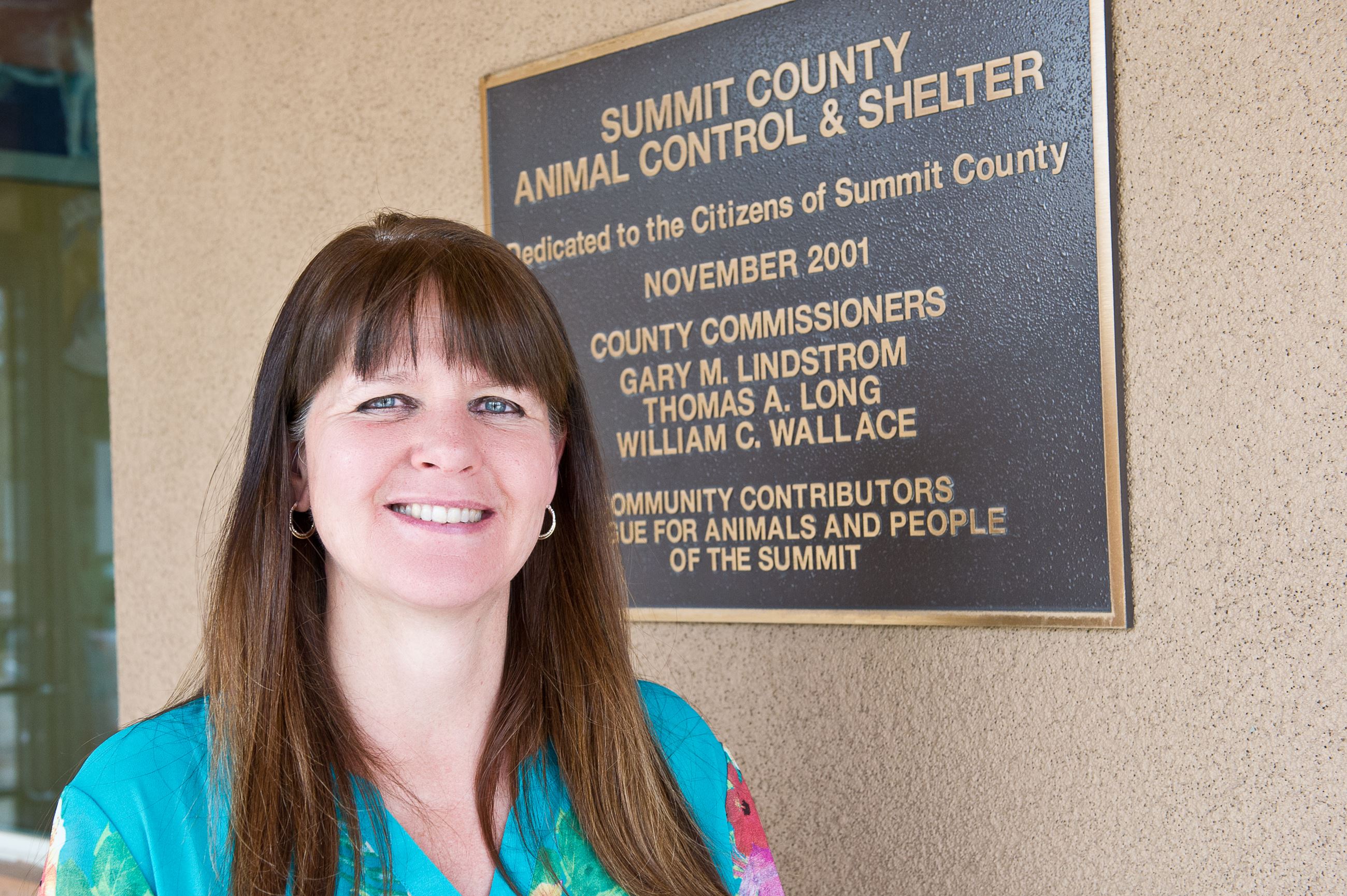 Animal Control has 10 staff, more than 100 volunteers, a pre-K-12 humane education program and a Summit County Animal Response Team that trains to respond to disasters. The shelter takes an active role in promoting animal welfare by working with several other Colorado and out-of-state shelters as transfer partners. The shelter houses approximately 640 animals each year, 68 percent of which are adopted; 29 percent are redeemed by their owners.

Hall has worked for Animal Control since 1988, when she started as an Animal Control Officer. She was promoted to Animal Control Supervisor in 1993, and to the Director position in 2010. Hall grew up in Independence, Ohio, with a strong interest in pets and wildlife and a desire to live in the Rocky Mountains. With these goals in mind, she earned a bachelor's of science degree in Wildlife Conservation and Management from the University of Wyoming and a commission as an Army Second Lieutenant. During her college years, she worked as a ranch hand outside of Cody, Wyoming. After graduating, she worked for the Colorado Division of Wildlife and Wildlife International Inc. Hall served in the Colorado Army National Guard for eight years, obtaining the rank of Captain.

Detentions Commander David Bertling supervises the Detentions Division and Civil Division of the Summit County Sheriff’s Office. Bertling graduated with a Bachelor of Arts Degree from Baptist Bible College, in Springfield, Missouri with honors in 1991. In 2003, he graduated the Texas Peace Officer Academy from Central Texas College in Killeen, Texas. He attended Sam Houston State University and earned a Master of Science Degree in Criminal Justice Leadership and Management in 2013. 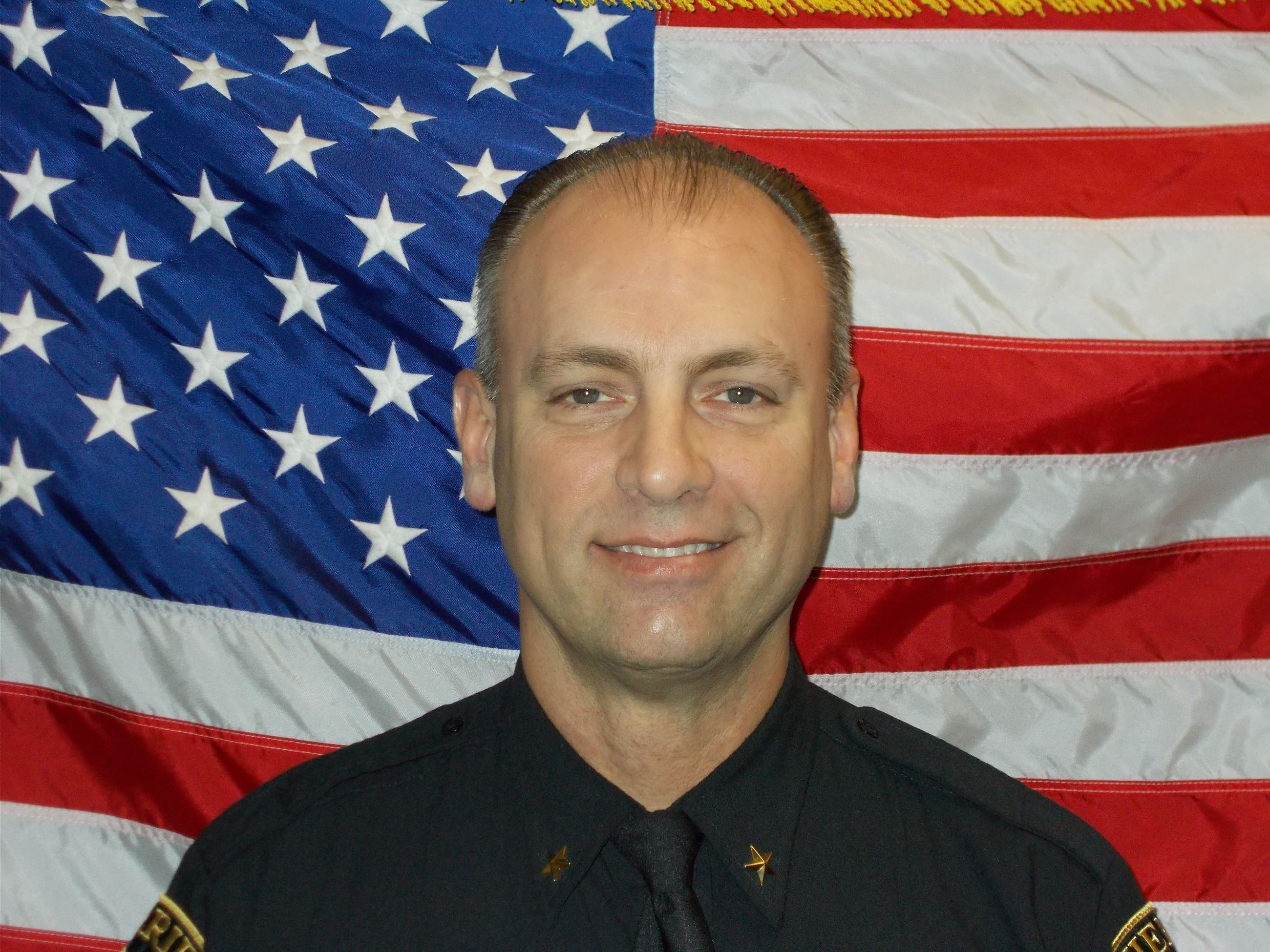 Bertling relocated from the Austin area in Texas to Summit County in 2018 to assume his role as the Commander of the Detentions Division. Joining Bertling is his wife Lisa, of ten years. They have five adult children. Among the many great outdoor activities, they are looking forward to are kayaking, biking, skiing, hiking, hunting, and fishing.

Commander Bertling started his career in law enforcement in 1999 with the Williamson County Sheriff’s Office, in Georgetown, Texas. Bertling became a Corrections Captain in January 2005, and remained in the position until 2016. He served as a Corrections Officer, Peace Officer and a Training Instructor.

Bertling served as a board member on the Capital Area Planning Council of Governments’ Law Enforcement Education Committee from 2009 to 2016. He has earned a TCOLE Texas Master Peace Officer License, Master Jailer license and TCOLE Instructor Certification. 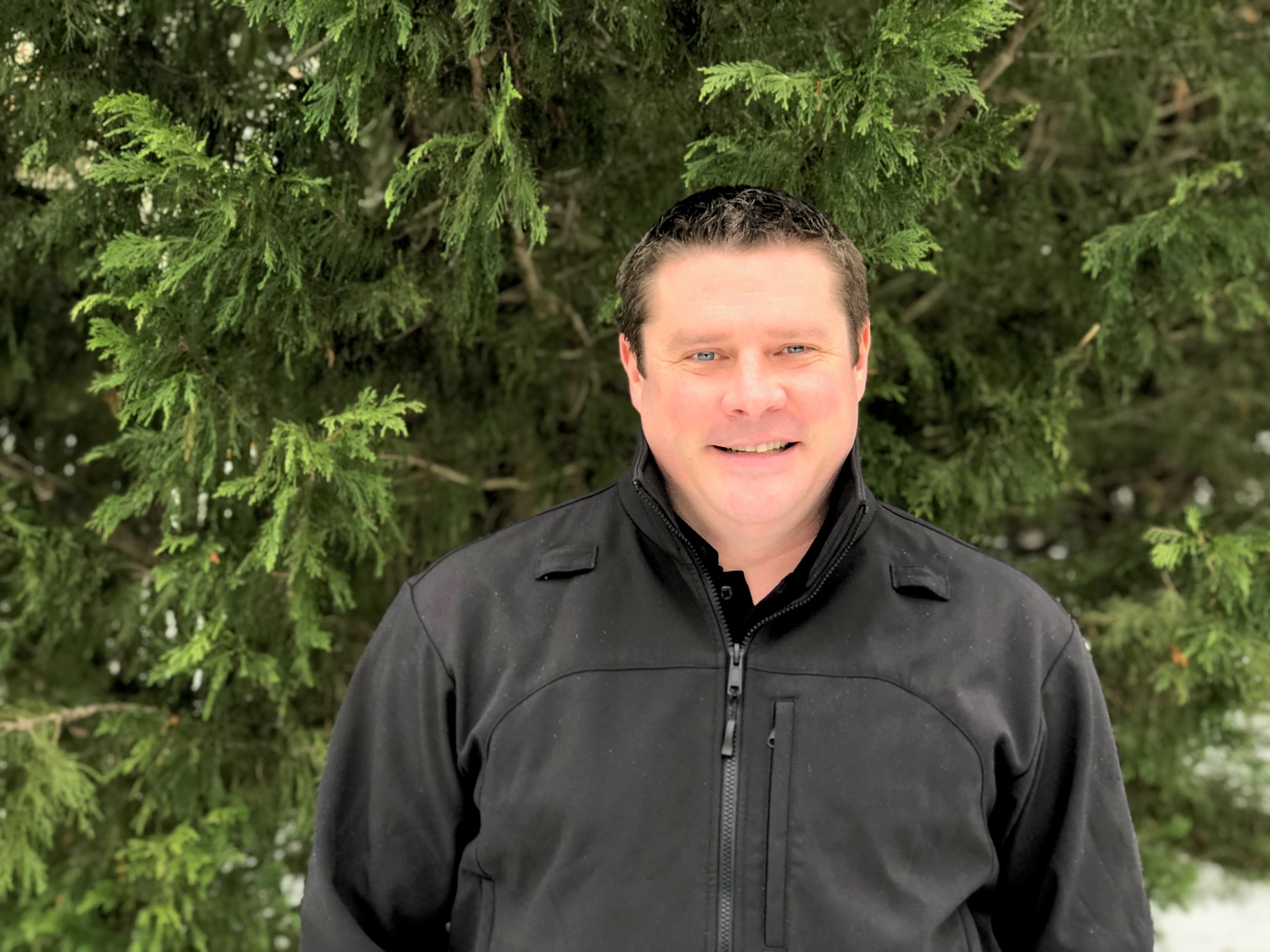 Brian relocated from Baltimore, Maryland to Summit County in 2018 to assume his role as the Emergency Management Director. Joining Brian is his wife of fifteen years, ten-year-old daughter and eight-year-old son. As an active outdoor family, they have not wasted any time taking advantage of all that Summit has to offer and they are extremely excited to become part of the community.

While in Maryland, Brian served as Director of Operations for the Baltimore City Mayor’s Office of Emergency Management. His daily responsibilities found him managing over 40 Emergency Management Specialists trained in field response and EOC management, advising senior leadership and elected officials, administering regional training initiatives, and overseeing the operations of all special events in the City of Baltimore.

Brian is credited with developing an Incident Management Team (IMT’s) for the Baltimore Police Department and enhancing their incident command capabilities. During Baltimore’s civil unrest in 2015, Brian’s experience managing and coordinating dozens of protests was put to the test. He worked side by side with the Incident Commander to advise on critical public safety functions and coordinate an unprecedented amount of mutual aid resources. Additionally, he has coordinated multiple Presidential disaster declarations and served as a Deputy Incident Commander for several of the largest events in the history of Baltimore City.

As a credentialed Operations Section Chief, Brian has experience working with an IMT to support major incidents. In 2017, he deployed to Florida for three weeks to support Hurricane Irma response and recovery operations. During this time, he assisted with coordinating response assets in the State Emergency Operations Center and was part of a team that managed a Base Camp in Big Pine Key.

Brian has a passion for teaching emergency management and has given presentations throughout the country on complex incident management skills and best practices. Some of his most recent presentations include the National Homeland Security Conference in Tampa, Florida and the International Association of Emergency Management Conference in Long Beach, California.

Prior to his role in Emergency Management, Brian served for more than ten years as a member of the Baltimore City Fire Department. During his tenure, he promoted through the ranks to the position of Fire Lieutenant and gained experience through specialized assignments to the Special Rescue Operations Team and the Hazmat Special Forces Team. His certification in high angle, confined space, trench, swift water, and helicopter rescue give him a good background of understanding in emergency services.